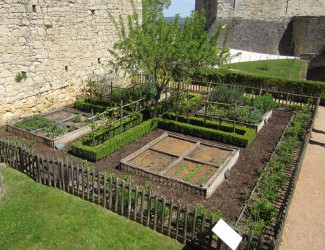 The medieval garden is a wonderful subject for discussion. Contemporary medieval accounts about cultivation of food provide us with an outline of what a medieval garden was like. The style and layout of the garden, its evolution and importance.

Accordingly, people today have been able to refer to these historical accounts and create 21st century, medieval style gardens. There are some stunning ones, particularly in France and England.

I have visited several of these medieval gardens over the years. Moreover, I have fallen in love with their splendour which you will realise from this page with so many of the photographs taken by myself!

Role Of The Medieval Garden 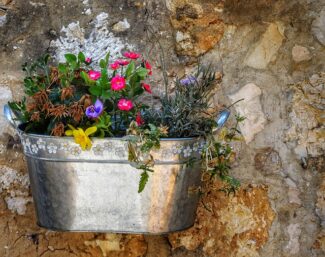 The medieval garden played a hugely important role in the life of people from 11th-15th century Europe. Whether rich or poor, noble or peasant, the cultivation of food was extremely important to everyone. Herbs, vegetables, fruit, flowers and cereals were the essence of medieval life and found their way into every medieval kitchen.

Of course, many people today do not have a garden but they can still grow their own flowers and plants. It might be to a smaller degree than a medieval garden but it can be a fun thing to do. Here is a good example – you can start by growing a few flowers or herbs in a wall planter. They are not expensive and are readily available from local garden stores or online. This rustic wall planter is ideal for anyone short on outdoor space. You can put a planter like this on a window sill or attach it to an outside wall. You don’t have to stop there either – use 2 or 3 planters and try growing different things.

Grow your own herbs and add a new dimension to your cooking. It might even encourage you to learn more about medieval herbs. I love the subject!

The management of medieval gardens was a meticulous task because food was such an important part of life. Vegetables, herbs, fruit and flowers grew in gardens whilst cereals such as barley, rye and wheat were farmed in large, open spaces. It took a lot of time and energy to cultivate a medieval garden and tasks like planting, growing, tending and harvesting were very labour intensive. In addition, the seasons of the year each presented their own challenges.

The task of any medieval Spring was to sow seeds and nurture plants and bulbs from the previous year. Correct management and preparation of the soil was really important for all plants to flourish. So, weeds had to be cleared and nutrients added to the soil. 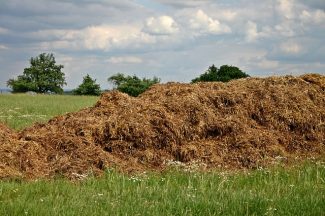 Of course, there were no commercial fertilizers in medieval times, so people used whatever natural source of nitrogen they could find.

Usually, this took the form of manure, a tradition still in evidence in the world today. Surprisingly, the spreading of manure to enrich soil for growing food was not a medieval invention. Muck spreading, as it’s commonly known in England, dates back at least 8,000 years! A team led by an archaeobotanist from the University of Oxford actually made this discovery a few years ago. You can read about it here.

As summer approached and progressed, a medieval garden was at its best. Flowers were blooming, herbs, fruit and vegetables all thriving. However, it was not a quiet time for the garden workers because they had to tend everything on a daily basis. Primarily, they had to ensure the soil was not too dry and to this end most medieval gardens had their own well. If not, they had were usually close a stream or river because water was, as it still is, a prime factor in good garden ‘housekeeping’.

Autumn was the time for harvesting. Tasks were varied and involved picking fruit from trees, gathering herbs and flowers and uprooting garden vegetables. As winter approached, medieval people spent much of their time preserving fruits and vegetables to make storable sources of nutrition. 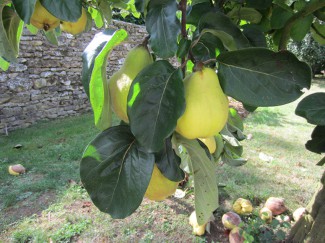 Quince growing in a medieval orchard

Growing Food: Rich vs Poor  – A peasant with perhaps just a little land available to them had to concentrate on growing just vegetables and herbs. This ensured that their family had their daily staple – pottage. In addition, they would enjoy a few hens eggs and barley bread.

A noble or rich landowner, of course, had more land and workers available to them. So they had greater options in what, where and how they grew food. Nobles were able to grow everything they needed. This included fields of wheat, much prized in medieval times for the pure white bread it made. They also grew a wide range of flowers which were used to make salads and household decorations.

With plenty of land available, they were able to cultivate vast fruit orchards. The fruit they produced had many uses – for dessert recipes, making salads and making fruit wines.

Essentially there were 4 types of plant in a medieval garden:

As mentioned earlier, gardening in medieval times was not widely documented at the time. It was thanks to people such as Sir Frank Crisp that we have a better understanding of the subject. Although a lawyer by profession, he was a great gardening enthusiast. In fact, he paid for and developed some special gardens of his own. His greatest historically relevant contribution is his highly detailed, personal study of medieval gardening. Its title? Simply: “Mediaeval Gardens”.

Many castles had their own garden and orchard, although most are sadly long gone. The produce of the garden was destined for the table of the castle owner, his family and also of course for his guests at medieval banquets. Today there are thankfully a few ‘new’ medieval gardens around the world. They have been specially cultivated for people to visit and enjoy. 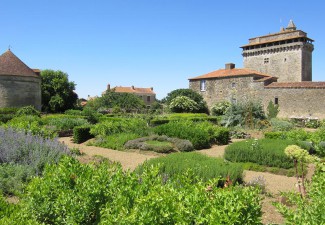 One such garden, and in my view amongst the best in Europe, is in the small medieval village of Bazoges-en-Pareds in The Vendée. I have visited the garden many times. I never tire of its beauty and the wonderful aroma that hangs in the balmy summer air!

The location of the garden is very special because it is directly adjacent to a medieval donjon (castle keep). The castle donjon has been well preserved and visitors are allowed inside. You can walk up the many, old stone steps to the very top. The magnificent view that greets you is unique. Look down onto the garden below and then raise your eyes to the surrounding French countryside. A simply glorious, historic place! 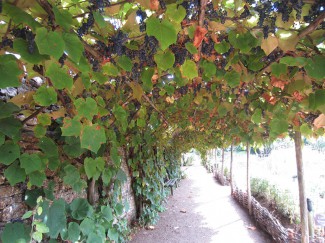 The designers of the garden at Bazoges chose a traditional medieval layout. They split the garden into different sections. Each section houses a specific type of plant. For example, it might be food for the table or plants for medicinal purposes.

What makes the Bazoges medieval garden special? It is the quality of the plants and the care that the gardeners bestow on them. Everything seems to have an immaculate precision. What’s more, it is all cultivated with expert loving care.

My favourite place in the garden is a wonderful grapevine canopy which provides a shady place to sit. There is an old, trickling water fountain nearby. Not far away is an old, stone, medieval well. You can sit, relax and survey all the marvellous herbs, vegetables, flowers and fruit trees. It is a quiet place but not silent. During the summer, the sound of hundreds of bees, butterflies and insects echoes around the garden.

It is the most glorious experience to sit there and soak up the sounds, smells and sunshine of this special place. On a balmy summer’s afternoon some years ago I filmed this video clip:

I have visited the garden at Bazoges numerous times over the years and taken hundreds of photographs. Here is a selection of some of my favourites which I uploaded to my medieval garden gallery.

If France is not an option for you to visit then there are notable gardens in England and the United States.

There are a number of English gardens with medieval plants and features. The gardens are spread throughout the country. Located as far apart as Devon and Cornwall across to Sussex and Kent and up to Yorkshire. The National Trust offers information on several of these gardens here. 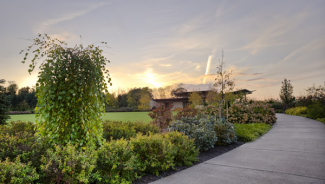 In the United States there is The Penn State Medieval Garden. The Department of Plant Science at The Pennsylvania State University developed it back in 1998. The idea was to grow and document plants in order to develop informative data sheets. In 2009 the curators rebuilt the exhibit next to the Penn State Arboretum. There is now a Kitchen Garden, Contemplation Garden and an orchard plants grown in medieval Europe.

All credit to the people who have taken on such such imaginative and unusual projects. I would love to see more like this!