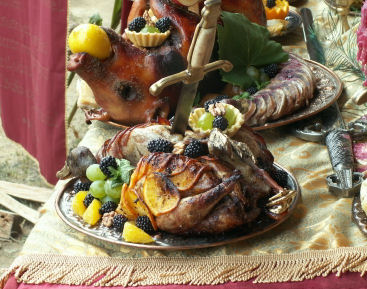 The reason why banquets are still popular today in the modern era is not difficult to understand. In medieval times, banquets were the very icon of indulgence and splendour when it came to food, wine, entertainment and the celebration of a special occasion. Colourful often historic surroundings, a large hall draped in medieval style tapestries and decorations, novel entertainment, exotic and plentiful food based on great medieval recipes, suitable drink and an atmosphere of conviviality are the key ingredients that draw people into the idea of wanting to go to a modern medieval banquet at some point in their lives.

This type of banquet in the 21st century is enjoyed by a wide range of people and for a wide variety of reasons.

Reasons To Stage A Banquet

Whatever the occasion, a modern medieval-style banquet is nearly always organized for a large number of people to get together and celebrate. Also, speeches are usually on the agenda. Indeed, in some countries today this type of celebration is hosted at the end of an academic conference.

Music is primarily the focus of entertainment at a modern medieval banquet and there are many individual performers and troupes today who can provide medieval banquet music.  In addition to music, of course, there are card magicians and medieval jesters who can readily entertain at a private banquet. For a more dynamic performance, you could even hire a medieval juggler – and there are some brilliant ones around! More often than not, they are circus performers with incredible skills acquired over many years. With colourful costumes and a novel repertoire of comic performance, whether you hire a medieval jester or a medieval juggler, these entertainers can help create the perfect atmosphere for a modern medieval banquet.

In addition to numerous castles and old country estates who stage banquets annually (some more often), there are also venues who style themselves totally in the vein of a medieval era banqueting hall. Generally they are open to the public but can also be hired for a private function. There are even companies who will bring this type of banquet to you – at your chosen venue and including additional post-banquet fun such as Texas Holdem poker (the increasingly popular poker card game). Click here to read more about banquet venues.