Medieval gambling is a subject well worth delving into. It tells us about human nature not only in medieval Europe but it encourages us to look back long before that and, of course, to the gambling games that have evolved since.

At a medieval banquet part of the entertainment would be the opportunity for guests to take part in a game of chance with rewards when they won against the odds or simply beat the other player(s). But what type of gambling would you have seen at a medieval banquet? Before answering this question, let’s take a look at the origins of gambling itself. This will allow us to understand how medieval gambling evolved and its origins.

Gambling was nothing new to the people of medieval Europe; gambling as a human activity dates back to the Paleolithic period – before written history over 3 million years ago!

The game of dice is believed to be the first known gambling game enjoyed by humans. In Egypt, as far back as 3,000 BC people enjoyed playing the dice game called ‘senet’ and the oldest dice ever found actually date to around 2800–2500 BC. They were discovered in an archeological dig in south-eastern Iran.

In China, there were gambling houses (the equivalent of today’s casinos in terms of the role they played in people’s lives) as far back as 1,000 BC. Card games were played in China in the 9th century and dominoes and lotto games followed in the 10th century.

By the time we get to 13th century Europe, gambling had become an accepted form of entertainment at a medieval banquet. Guests including medieval knights would mainly enjoy playing dice games but in the late medieval period (mid 15th century) they also enjoyed card games which were introduced to Europe by travellers who brought them back from Asia and Arabian countries. France, Italy and Spain feature in contemporary writings about medieval card tricks going back as far as 1408. The history of card tricks is a fascinating subject in its own right.

Hazard is a dice game that dates back to the 13th century and was very popular in medieval Europe, especially medieval England. It was especially popular with the rich as it was often played for high stakes. According to historians, there are claims of some people enduring huge losses – and not just money. Sometimes in the case of medieval knights they lost their horses, their armour and swords, even whole estates! 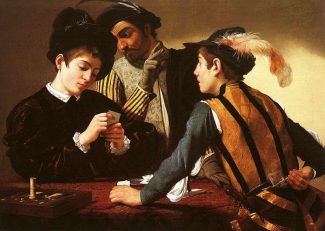 There were no casinos in medieval Europe. The first gambling house to be referred to as a casino was in post-medieval Europe, built in 1638 in Venice, Italy. It was called the Ridotto.

The playing of card games soon led to rise of the cardsharp where skillful players would hide cards and by means of distraction, often with an accomplice at or near the table, they would replace less worthy cards and cheat their way to winning the game. Caravaggio’s magnificent painting ‘The Cardsharps’ (featured right) depicts such a scene and the looks on the faces of the three characters tell you exactly who are the cardsharps and who is the naive victim of their scam.

With regard to popular, modern-day casino games like roulette and Black Jack, there is no evidence of these being played in medieval Europe. It is believed they were 18th-19th century developments.


There is a wealth of information on medieval gambling for anyone who is interested to learn more. Here are some of the websites that I found offered good information:

North Cadbury Court
Such is the love of the idea of medieval gambling there there is even a Grade I Listed building in England with a 13th century, medieval hall (built by the de Moels) which has been converted into a country house with a modern casino in its basement! This might be one of the smallest casinos in the world with space for just 30 gamblers who can choose to play at a blackjack table, roulette wheel and or even in a dedicated poker room.