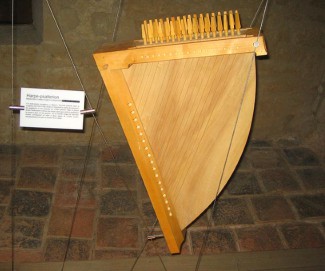 Music played at medieval banquets was unique. It was a reflection of the most popular music of that time but for the rich and nobles who were the privileged few to enjoy attending a banquet, the music also embodied the political alliances and cultural influences of their forebears. It had a far greater significance than just being light entertainment.

In medieval Europe, the majority of music in general was performed in church in the form of plainsong. For the common man, however, his experience of music was much more limited and came from social events and rituals. An example of this in medieval England would have been dancing round the Maypole which was done every Spring and which most medieval village people attended.

For the rich and nobles, it was very different.

As explained in the opening paragraph, the music they were used to enjoying was much more complex. It all goes back to the Norman Conquest in 1066. After his victory at the Battle of Hastings, William the Conqueror along with his barons and nobleman brought Norman culture and musical influences to England. Due to the intermarrying and political affiliations which inevitably ensued over subsequent generations, particularly during the reign of Henry II and his wife Eleanor of Aquitaine, the songs and music of the French troubadours and trouvères were assimilated into medieval English society. Troubadours, trouvères and other musicians or minstrels promoted the ideals of courtly love. 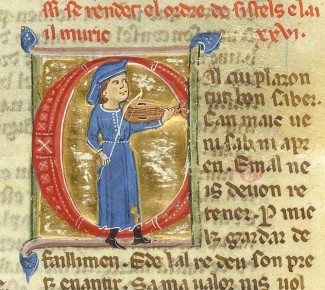 The troubadour Perdigon playing his fiddle.

A Troubadour was a composer and performer of Old Occitan lyric poetry during the High Middle Ages. The earliest troubadour whose work survives is Guilhèm de Peitieus, better known as Duke William IX of Aquitaine (1071–1126) – grandfather of Eleanor of Aquitaine from whom 11 songs survive to this day on subjects ranging from love and sex to politics. The word Trouvère is the Northern French (langue d’oïl) form of troubador the langue d’oc (Occitan) word referring to poet-composers influenced by the troubadours. The trouvères however composed their works in the northern dialects of France. The first known trouvère was Chrétien de Troyes. The majority of these lyrical poems would have had melodies.

After her marriage to Henry II in 1152, Eleanor of Aquitaine brought her love of music and indeed her patronage of the troubadours from her own domain of Aquitaine to the English court. 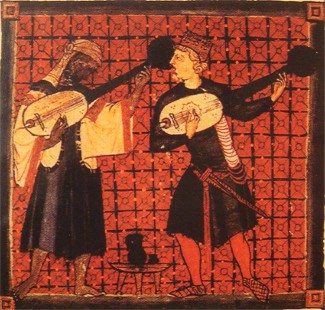 Christian and Muslem both playing an Oude

Another major influence on the music of England came with the advent of six major Crusades which began in 1095 and continued for almost 200 years. You can read more about this period in history here on Wikipedia.

During these crusades, knights and soldiers experienced for the first time new forms of poetry and music, particularly Arab love songs. On returning to medieval Europe they brought back these new cultural influences which then began to find their way into medieval entertainment.

So we can see that music heard at a medieval banquet would most likely have been performed by individual or groups of troubadours or trouvères either instrumentally or in the form of song. The image (right) depicts one such instance.

The love of medieval music, storytelling and legend continues to this day with many artists, writers and composers finding inspiration in that era.

Here is a great example of a contemporary composition which depicts the Arthurian legend ….

From the album The Earth In Turquoise by Stephen Caudel. Click here to enjoy more extracts from this superb album and watch a stunning video about the love affair between Queen Guinevere and the medieval knight Sir Lancelot. A must for all lovers of emotional music and medieval legends!