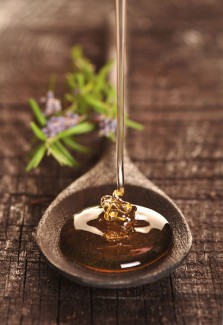 Honey to sweeten the mix

Delicious desserts are not the first thing most people think of when they consider food from the 11th-15th century. More likely their first thoughts turn to meat, bread and pottage.  However, desserts played a strong role in medieval life and although they were not as varied and sumptuous as the kind we enjoy today, these old-fashioned desserts could nevertheless be very tasty.

The primary ingredients used in many medieval desserts were honey, ginger, fruit, wine and spices. Spices, it has to be said, were enjoyed mainly by the rich as they were expensive.

Eggs, milk and cream were used for making cream custard tarts. Often honey or spices were added for extra sweetness and flavour. Sometimes the milk was substituted by almond milk to make it even richer, particularly if it was outside Lent. However, this was generally only affordable by richer people. A custard base made with almond milk works really well in ice cream making. So much so that I came up with my own medieval ice cream recipe based on it!

A surprising common ingredient in desserts in medieval times was the pine nut. Pine nuts made a good, palatable sweet dish when combined with toasted bread and honey mixed with spices. In fact I have made some homemade ice cream with this ‘sweetmeat’ added.


Dates and pears were popular in many sweet recipes. 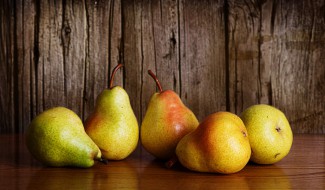 Pears made a tasty medieval dessert

Dates could be used to make sweetmeat when combined in a recipe with brown breadcrumbs, white wine, brown sugar, cinnamon, ginger and egg yolks.  A little like a date loaf recipe still popular in England today.

Pears were popular when cooked in red wine and sometimes mixed with other fruit such as mulberries. Ground ginger and cinnamon were a must in making this and it was one of the most popular dishes served at medieval banquets and feasts. Poached pears are still popular today with modern variations such as poire belle helene adding ice cream into the equation. Click here to see a delicious photo!

A good example of poached pears cooked in the medieval period would be ” Wardonys in syryp“ in which pears would be boiled in a sauce made up of cinnamon, red wine, sugar, ginger, possibly saffron and a little vinegar to give it a sour and sweet taste. What a combination!