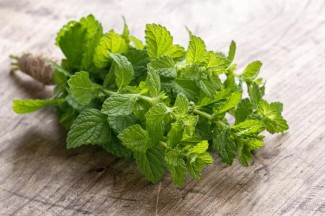 Mint – one of many medieval herbs

Salad was not quite the same in the 12th century as it is today. Some of the ingredients we are familiar with such as tomatoes, potatoes and iceberg lettuce were not available in medieval Europe so a medieval salad was quite a different dish.

A medieval salad was usually a mixture of herbs and flowers combined with oil and vinegar which made a colourful and tasty cold dish. Having fresh ingredients available to make salad was important. So, the medieval garden played an important role in everyday life. Garden produce, including what many people today regard as weeds (dandelion, borage, purslane), was the source of inspiration for many recipes. These recipes included salads!

Ingredients For A Medieval Salad

Amongst the most popular ingredients for a medieval salad were the primrose, the sweet violet, mint and parsley. Purslane was also very popular – recently discovered as a rich source of Omega 3 and now much sought after by people looking for a healthier diet. It is true to say that many plants were highly regarded in medieval times for their health benefits so a good salad was much more than just an appetizing dish.


The most likely fruit to find its way into a salad was apple or the wild strawberry. It is believed that the woodland strawberry we know today was growing in Europe as far back as the 14th century.

Just imagine this for an appetizing salad dish back in 12th century England:

Sounds like an exotic dish from a celebrated 21st century chef!

There is in fact a growing trend today of adding fruit and flowers to salads. Flowers such as sweet violets and primroses certainly add a great touch of colour as well as a new taste experience. NOTE: Not all flowers are edible and you should always check before adding any flowers to food dishes. For example, sweet violets (viola odorata) are edible but other types of violet such as African violets (saintpaulia) are not. Here is Wikipedia’s list of common edible flowers.