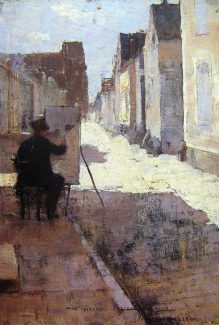 Grez-sur-Loing – the Delius house is near the church at the bottom of the street.

Recently I was reading about the life of Frederick Delius, a composer who was born in England but lived most of his life in France where his wife Jelka often made him a dandelion salad with dandelion leaves fresh from their garden.

I remember as a child listening to my Nan talking about how she enjoyed a dandelion salad when she was younger. So I thought about the dates and tied them together. My Nan was born in 1896 so was entering her teens around 1910 and it was around this time that Jelka Delius was developing her garden and started making her own dandelion salad. So in early 20th century England and France there was definitely an established taste for dandelion salad!

The tradition of enjoying a salad made with dandelion leaves does of course go back to medieval times. In fact, it is believed humans have eaten dandelion leaves since pre-history! There are many varieties of dandelion and some are more palatable than others.

Check out the Wikipedia dandelion page to read more about the varieties, where and how used in human consumption.

As for a medieval salad, in 13th century Europe the dandelion leaf was just one of many natural ingredients that people could use. They would pick them fresh from the fields or, if they were lucky, their garden and they would often pick dock leaves as well for their salad. Dock leaves, as with the dandelion, are regarded by many people today more as weeds and would not dream of adding to their salad!

Flower petals such as primrose and marigold were also enjoyed as part of a medieval salad but don’t rush off and pick any old flowers for yours! First of all you must check carefully which are the most common edible flowers such as on this Wikipedia page here. The knowledge of which flowers and plants could be eaten safely was handed down from generation to generation in medieval times. It was the same with herbs – which were best for medicinal purposes and which for culinary use.

At the start of this post I referred to my Nan – it was her husband (my Gran) who was known in their local community as an expert on the use of medicinal herbs. Apparently, local people often came to him for advice and my mother insists that on one occasion when the doctor thought she might have diptheria, it was my Gran who made her better using a hot herb poultice that he made.

Back on the subject of medieval salads again, there were many other fresh ingredients that people used in salad making and with which we are more familiar today. These were spinach, mint, chives and parsley. They also enjoyed adding apples and wild strawberries to their salads. Things like potatoes and tomatoes were unknown to medieval salad eaters as they weren’t available in Europe until the 16th century.

What is interesting is that dandelion leaves are believed to be full of vitamins and minerals as well as a good source of calcium, potassium, iron and manganese. They apparently have more calcium and iron than spinach leaves! So we should perhaps give credit to our ancient and medieval ancestors for inherently knowing that there was something good for us in dandelion leaves 🙂