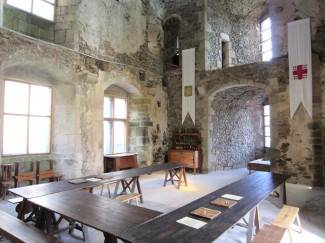 The word ‘feast’ is a sumptuous word and the idea of a medieval castle feast conjures up probably the most lavish table of food you could imagine! From roast meats to poultry, game and fish of all kinds through to sweet tarts and candied fruit and cheese, it was all on the menu at a feast or banquet given by the local lord at his castle back in medieval times. The recipes often included things one doesn’t see on menus today (thankfully!) such as swan, peacock, crane, curlew, lapwing and heron.

The most lavish feasts would have up to 6 different courses and at many a banquet the host was noticeably trying to outdo a rival noble from a previous banquet they had attended. The result was that one would sometimes see the most unusual, incredibly colourful presentations of food served on the feasting table. There is a great example of this described by a 15th century French historian after he attended a medieval feast back in 1455, hosted by the Count of Anjou.


It’s not clear where the feast was held but one contender is the medieval castle at Angers (left) where many Counts of Anjou were born and spent much time entertaining guests. In his description he lists 6 courses, each of which contained at least one very unusual medieval recipe, as follows:

The full details of this incredible and lavish medieval castle feast can be found here.

If you fancy a medieval recipe that’s not quite so extraordinary but would still like to savour the taste of medieval spices in a hot dish, then this medieval beef and red wine stew might be just for you. If meat is not to your taste then you can check out recipe information on fish, soups and vegetables here on the main recipes page.