I had just been reading about cloud bread and it led me to considering the vocabulary of medieval bread making. When it comes to bread in medieval times the letter ‘C’ is quite dominant. If you read my introduction to medieval bread page you will see a list of the most common names and types of bread which were eaten in the 13th century. Out of the seven listed, three of them begin with the letter C: 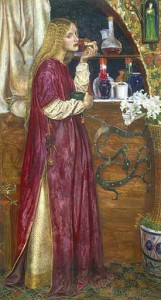 What wonderfully, colourful names these are, particularly for something as bland and basic as bread. The culinary vocabulary of medieval cooks and bakers is a whole world in itself!

This picture of a medieval queen eating bread and honey conjures up a notion in my mind of the household cook looking on from a distance and wondering whether to bake cheat or pandemain for the next day!

I then returned to the idea of modern bread and baking terms. Generally there is nothing half as exciting – other than this cloud bread that I had just read about.

The two words cloud and bread are not a natural mix – cloud represents something intangible and out of reach whilst bread is solid, staple and made by human hand. Then I looked at photographs of cloud bread and the penny dropped. The words are perfect to describe the lightness, shape and texture of this modern bread recipe.

Low in carbohydrates and gluten free, Cloud Bread certainly looks fluffy, tasty and fun. Fun is always an important part of good home cooking for me 🙂

I chanced upon cloud bread in a news item published just yesterday (February 3 2016). The writer claimed that cloud bread is the latest food obsession on the Internet, backed up by statistics of Pinterest repins. For those unfmailiar with Pinterest, it is a resource where people can search for and share web images and is very popular with foodies looking for recipes. So bread recipe lovers have apparently been looking in their droves for pictures of cloud bread.

I ventured to look for more about this new bread and found very little. So I have determined to do more research and then come up with a recipe of my own. In the meantime, my barley bread recipe will suffice as a good medieval bread reference point!

Also, I wondered how long recipes for cloud bread might have been around. From the news report mentioned above, one would imagine it to be a very recent culinary invention. So I dug into YouTube’s bread making archives. I discovered a video made back in August 2012 by Christi Silbaugh demonstrating her recipe for making cloud bread. The details is all there and her daughter who is about to live independently for the first time takes the culinary lesson on board. She also really enjoys eating the end product smothered in jelly and peanut butter!

The sense of fun that I mentioned as being so important in home cooking is all there so hat’s off to Christi for sharing her video and being amongst the first to discuss cloud bread – almost four years ahead of it becoming an Internet fad. They say overnight success is a rare thing in life, it seems bread recipes are no exception.
Let others read this page
Share on Facebook Share
Share on Pinterest Pin it
Share on TwitterTweet
Send To Devices Send