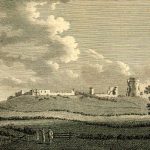 To think that medieval food might have any connection to the RMS Titanic might initially sound strange. However, on 21 April 2018 a unique item of Titanic memorabilia is to be auctioned - an original menu of the very first meal served to the ship's crew during its sea trials on 2 April 1912. It belonged to Second Officer Charles Lightoller who, … END_OF_DOCUMENT_TOKEN_TO_BE_REPLACED